A federal judge in Arizona recently picked the insured to win a discovery battle familiar to coverage lawyers, ordering that the insurer must produce its training and claims-handling manuals. This is excellent news to insureds left trying to determine why the insurer’s answer to coverage is so often “no” or, only slightly better, “a lot less than you thought you were going to get.” 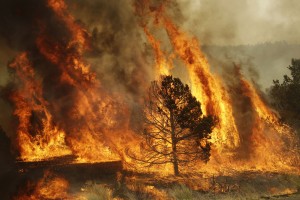 A forest burns during a backburn operation to fight the Wallow Fire in Nutrioso, Ariz., Friday, June 10, 2011. A massive wildfire in eastern Arizona that has claimed more than 30 homes and forced nearly than 10,000 people to evacuate is likely to spread into New Mexico soon, threatening more towns and possibly endangering two major power lines that bring electricity from Arizona to West Texas.(AP Photo/Marcio Jose Sanchez)

In White Mountain Communities Hosp. Inc. v. Hartford Cas. Ins. Co. (Dec. 8, 2014), White Mountain operated a hospital in rural eastern Arizona and had purchased a property policy from Hartford. A very large forest fire, known as the Wallow Fire, burned about 841 square miles of forest in the area around the hospital, resulting in the evacuation of thousands of residents — and potential patients for the hospital.

That loss of business income comprised the great majority of the hospital’s covered losses. Hartford paid only $40,028 for property damage, but an additional $683,520 for the hospital’s lost income from the many missing patients. White Mountain estimated its business-interruption damages much more severely than Hartford because of the expected slow return of residents to the area, figuring that the fire would cost between $2.8 million and $3.2 million in lost income.

To discover (and to counter) what was driving Hartford’s lower number, White Mountain asked for Hartford’s claims manuals, training manuals, and claims handling guidelines. Hartford responded that it didn’t have any of these documents to give, which drew an exceptionally strong rebuke from the court:

The judge followed this justifiable pessimism with an order to turn over whatever training materials Hartford had, noting that the “nomenclature is not controlling” as to what Hartford calls these documents, which I read a warning against any further gamesmanship in responding to discovery with only the very letter of what an opponent asks for.

In addition to being compelled to produce its training and claims-handling documents, Hartford also lost its bid to withhold its personnel files for the adjusters working on this loss. Echoing the suspicion of policyholder’s counsel in just about every dispute, the judge found that the personnel files “may disclose information showing that the adjustors had reasons to ‘low-ball’ their evaluations, were not actually competent to adjust the type of claim made by White Mountain, or did not process the claim in a reasonable manner.” This acknowledgment lays bare the conflict that adjusters have between making a good-faith calculation of damages and serving their employer’s interest in paying as little as possible on every claim.